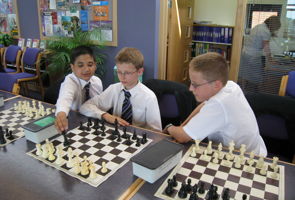 A wide variety of co-curricular activities are available for students to build on existing talents whilst developing new skills and interest here at St. Olave's with the vast range of opportunities, often jointly led by senior students that take place during the school week, on weekends and during school holiday periods.

There are regular school concerts and drama productions as well as a wide range of orchestras, ensembles, bands and choirs. Individual tuition is also available on a wide range of instruments

Many of our societies produce regular journals and publications with are available to view via the following link:

Regular after school and weekend sports fixtures take place as well as the ever popular popular Duke of Edinburgh Award Schemes, World Challenge and Operation Wallacea (see links below).

In addition, the school’s ‘Le Chavetois Society’ has raised money and carried out voluntary work in the local community since the First World War.

A large number of trips and visits are organised on a regular basis, including Art gallery visits, geography field trips, regular rugby tours both home and abroad and modern language trips throughout Europe.

Each year, as part of the extra-curricular programme, students have the opportunity to undertake a variety of overseas tours and expeditions. All who join St. Olave’s are expected and encouraged to play a full part in this rich school life.

The St. Olave’s Medics Society is a vibrant, dedicated and thriving community and the perfect place for like-minded individuals interested in studying Medicine, Dentistry or Veterinary Science to come together to hear students and prestigious external speakers alike give talks, learn more about the application process and support each other in their shared  interest and love for the subject!

This year has been a successful one, with over 20 student talks on a huge range of topics from the ethics of designer babies to the evolution of the NHS, to a deep dive into sickle cell disease.

Beyond this, we have also had many engaging ethical debates regarding medical topics such as vaccine mandates, the privatisation of healthcare and abortion. As well as this, we collaborated with some of the other esteemed societies in our school, from PolEcon to FemSoc, to deliver joint talks on intersecting issues.

Outside of society meetings, features such as Book of the Month and Article of the Week helped support the students with their wider reading, while the Medics Journal saw dozens of students contributing to a high-quality journal with well researched articles on a plethora of medical areas of interest.

Medics members have also had the chance to participate in university style PBL sessions run by Old Olavian medical students with professional experience in running these courses. All in all, despite the challenges faced during the year, Medics Society has had one of its best years yet with a strong outlook on the future!

Thank you to everyone involved with this Society, especially Dr Bradley for her invaluable work.

The Law Society whose presidents are Justin Adesina and Prajval Haldia.  This year, they have engaged in a variety of presentations given by our Year 12 cohort. Topics have included: tax law, jury equity, and wrongful convictions amidst many others. As well as presentations they have held intellectual debates on current legislation, such as the new policing bill, and hope to engage in more in the future.

They hope to compete in The Bar Mock Trial, a national competition that will see them competing against other schools in a mock trial, judged on their ability to run a trial rather than the verdict. As well as this, we organise an annual Law Journal, giving students the opportunity to explore any area of the law that they find particularly interesting.

As they approach the end of the academic year, the previous presidency team will return to provide a detailed account of their experiences in higher education studying law as well as some tips and tricks to help with the UCAS process alongside our current presidents.

The Physics and Engineering Society

Their President is Lara Tatli with Vice Presidents Caleb Lee and Jamie Perry. Physics and Engineering Society is run for physicists and engineers alike with an interest in understanding how and why our universe behaves the way that it does, and how we can apply this knowledge practically to shape our daily lives.

This year, they have hosted a huge variety of talks and quizzes within diverse areas of the subject, from fundamental physics topics such as the Standard Model of Particle Physics, through to applied engineering such as how musical instruments work.

Some highlights include a talk on ‘Chaos Theory’ and a simulation of the Lorenz Attractor by Moosa Saghir (Year 12), and a show-and-tell of some old engineering equipment by Vice President Jamie Perry (Year 13). Most recently, President Lara Tatli (Year 13) presented a talk on ‘The history of quantum mechanics’, which included solving the famous Dirac Equation and using it to prove the existence of antimatter.

Physics and Engineering Society runs every Friday at 1:00 pm in S7 for Years 12 and 13 and continues to be among the most popular societies at St. Olave’s with a fantastic weekly turnout and over 130 followers on Instagram.

They are looking forward to publishing the next edition of the Physics and Engineering Journal and have received some fantastic articles.

Their president is Velian Velikov with Vice Presidents: Nandini Chanda and Zackary Welch.
Enthusiastic mathematicians gather once a week to share and discuss interesting areas of mathematics, whether it be recreational, cultural, or just outside the school
syllabus. Some of the aspects they have looked at are:

Their presidents are Martha Hodgson, Elise Stringfellow, and Crystal Nettey. They have had a year full of wonderful pieces of literature, and the wonderful people who engage with them.

Talks ranging from Detective Fiction to Nonsense Literature and The Marquis de Sade to the Gothic.

They have been diverse and numerous, each enlightening and intriguing; helping to broaden students’ literary horizons and allowing speakers to be enthusiastic about the subjects they love in a society where this is not just appreciated but encouraged. Quizzes and Topical debate sessions, this society has something for everyone. Helping show just how important literature is to every field of study, even in the most unexpected spaces, like our collaboration with Space Society on Adams’ The Hitchhikers Guide to the Galaxy.

They have run poetry workshops, many of those produced featured in our Society Journals, and creative writing. Giving members the opportunity to chase their own interests and think imaginatively, without borders or limitations of the curriculum of checklist criteria.

As a society, they appreciate the many different forms of literature and the many different ways in which people can engage with it. Producing their Literature Journal and Blog, filled with writing by their members, the ways in which their members can contribute their own work is numerable; there is no one way to be a lover of literature, and as a society, we seek to foster these personal discoveries.

“When I look back, I am so impressed again with the life-giving power of literature. If I were a young person today, trying to gain a sense of myself in the world, I would do that again by reading, just as I did when I was young.” ― Maya Angelou – America poet.

The Blockchain and Cryptocurrency Society

Their presidents are Navaneeth Madhavan and Rupankar Majumdar. In recent years, the usage of blockchain technology and cryptocurrencies has become more and more prevalent.

The nature of transactions and money itself is changing rapidly. However, there are many misconceptions amongst the public regarding what this technology is and why it is so important. To address this, over the past academic year, there have been a multitude of talks at Blockchain and Cryptocurrency Society discussing the underpinnings of how cryptocurrencies operate and the economics behind them.

Students go along to the Society to learn how to separate Bitcoins from Blockchains and really understand what this new, disruptive technology is all about.

The Philosophy and Politics Society

The president of this Society in Laura Gander. Across the academic year there has been a broad spectrum of student led talks, many examining the role of the state, including its duty to different groups within society and balancing the relationship between religion and government. This has been coupled with debates about the best
ethical ideologies to use as a framework for governing, considering the merits of utilitarianism, deontology and different thought experiments such as ‘the trolley problem’ of utilitarianism which arise when such theories are implemented on a wide scale.

Other students have led discussions which have examined more niche philosophical schools of thought such as anarchism and egoism and their influence on human nature. Human nature has also been explored in discussions about the morality of crime and the ethics of protesting, which proved extremely topical in the wake of climate change protests.

More contemporary ethical discussions have also been held,
such as who deserves rights in a society, spanning from criminals to robots to plants, to the influence on social media on the idea of human free will.

Talks have also been given about the merit of philosophy itself, exploring its importance in comparison to science, and its role when helping people understand and appreciate art.

Overall in this academic year, a wide range of topics have been rigorously examined in Philosophy and Politics Society.