News from the German Department 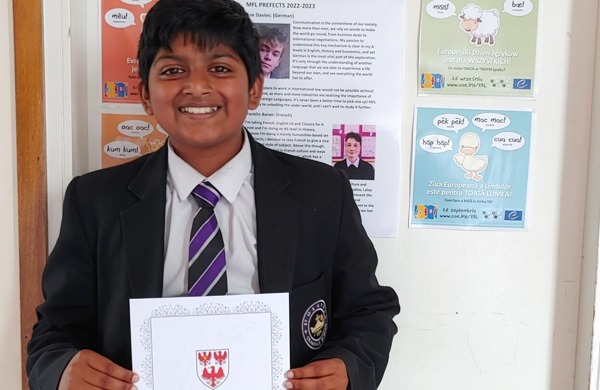 The German department is pleased to share a number of student successes in recent competitions.

In year 8, Thomas Howcroft, Vasi Shah, Ashvin Aravindan, Om Kuravinakop, Harwin Victor Bharathy, and Arush Upadhye won their category for the Oxford German Olympiad, which featured them drawing a picture of creatures that live in and by the Rhine river, and describe them in German. Similarly, Yifan Luo in year 7 came runner-up in this category. Also in 8H, David Wade came runner-up in the category for writing about a day in the life of a prehistoric inhabitant of Lake Constance.

And finally, Kethav Sudhakar in 7H has won the national category of the Anthea Bell Translation Competition (level 1). The winners of the Oxford German Olympiad have been invited to the Prize-Giving Ceremony at the Bodleian in Oxford.

Well done to all winners and those who participated!